50,000 fake facebook accounts have been registered by emails under the domain caira.uk.com this information has been reported by the Egyptian political activist Seif Eldin CastRo and i have checked and verified this information. CastRo suspects that these fake accounts have been created by members of former Egyptian regime, former dissolved national security department members or former dissolved National Democratic Party members and have been used to attack political activists and bias polling results on the social media platforms.

That could be a big scandal for Facebook which have not officially made any response or statements to this matter. This could simply mean one of 2 things:

2. Facebook have cooperated with Caira to create these accounts or at least have white listed their domain for one reason or another.

Here are the story details:

50,000 Fake Facebook accounts have been created under the email addresses 1@caira.uk.com until 50000@caira.uk.com all of them with the same password: “123456”. A huge campaign is going on now by the Egyptian political activists to take over these accounts, by changing their passwords and/or closing them, some people have also posted some profile pictures having Egytian flag representing that they took over these profiles. 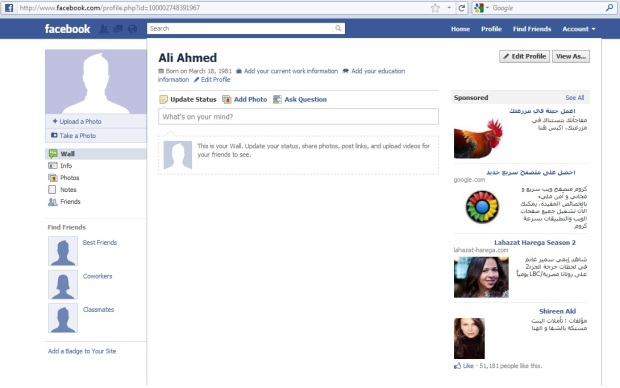 The profile was pretty much empty except for mandatory information like name (Ahmed is a typical Egyptian male name), birth date, gender

http://www.caira.uk.com itself seems like a website which is selling electronics and home appliances but except for the homepage, the rest of the site is not working.