Today i received my Google Wave invitation which i applied for about 2 weeks ago. You can request your invitation from here.

The idea behind Google wave is to replace the email system which was invented 40 years ago with a more modern and advanced communication media. The wave or a communication stream is a single entity that is stored at Google server and allows people to communicate, cooperate and collaborate. Share their media, photos, videos, and gadgets and even chat in a real-time manner. You can say it is something trying to put all the social media and web 2.0 buzz that we see these days. 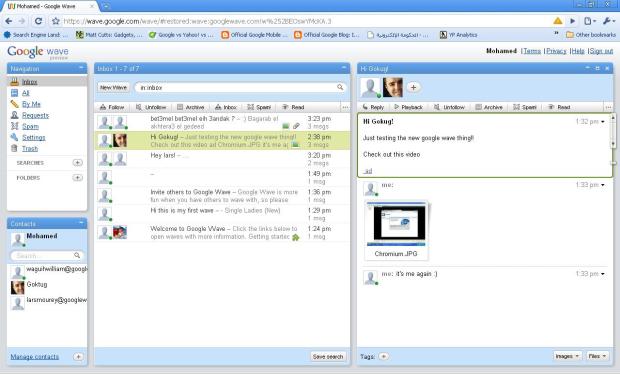 I think it’s gonna be a big thing if people use it the way it is meant to be… otherwise it will be a mess, a really big mess… idea of a wave is to be one topic under which people put their contributions in one centralized place. Imagine that some recipients will open the same wave and start putting their comments  branching the topics into other topics that were not intended when the wave already started… It will be a complete mess. Imagine also that there will be no webmaster or owner of the wave, anyone can do whatever he/she wants…. No rules…

Imagine when you receive an email and you reply to it. Then after a couple of days the same person wants to send you another email, so he replies to your old email and talks about a new topic… isn’t that a mess an email that has something that is not related to the original email subject… How would this happen in Wave? much worse.

What i want to say is that wave will only work good if people get the right education to use it… and it becomes a culture… otherwise it will be one of those things that looked good at the beginning and then started to make our life more complicated after this like emails and mobile phones!